In my previous posting I explained details about and differences between the main three old German scripts: the older handwriting script Kurrent, the newer handwriting script Sütterlin and the print script Fraktur. Of course there are more but the majority of those either are variations of the previously mentioned three scripts – or they go back into a time where we rarely find any documents about our ancestors – or they weren’t used in Germanic areas.

Let’s now have a closer look at each of them and learn about the letters. I’ll show you  my system of how to split the letters into different letter groups to narrow down the options in case you can’t identify a letter right away.

In a final step I’ll show you the snares and traps of possible letter mix-ups.

Kurrent is the older German handwriting type of the three already mentioned main old German scripts, Sütterlin the younger. Usually Kurrent is a cursive font, more or less, mostly depending on the writer while Sütterlin is mostly upright.

More decorative versions of Kurrent often were used in chancelleries for official documents and contracts. If you have to decipher and transcribe old German sales or testimentary contracts you’ll face “Kanzleischrift” (= chancellery script). Lots of swirls and squiggles, nice to look at, but nasty to recognize initial letters at least.

Sample sheets for the letters

While you are used to 26 letters in an alphabet this is only partially true for the old German scripts. Additionally to the a-z letters (both lower and upper case) the old German alphabet has a few more letters.

I created a sample sheet for you with various Kurrent and Sütterlin type scripts (downloaded for free under Creative Commons 0 licence, mostly from Peter Wiegel’s website, but also one by R. G. Arens). Click on the picture to get a PDF version of the whole sample sheet.

The fonts I used for this sample sheet are:

Muse a bit over this sample sheet. Pick one letter and compare all 10 versions of it to see the similarities and characteristics that all 10 of the letter’s versions share. Even though these are all computer fonts and not handwritten by a person, they’ll provide a good indication of how much letters can change without losing their characteristics.

Give the document text a first try

Sit down with your document and write down every word and every letter that you actually can decipher. It’s important that you do this in your own handwriting or a computer font you are used to.

I’m pretty sure you were able to read at least a part of that, if not even everything. Amazing, isn’t it? A bit like the 1970s TV show “Wheel of Fortune” if you can remember it (I do, which gives away my age…). But it only works if you use your own handwriting or a computer font your brain is well accustomed to.

Replace the underscores and fill in the gaps

But how? There are so many strange old German letters to choose from. How many? Let’s do a little math first:

+ 27 lowercase letters including two versions of the lowercase s
+ 26 capital letters
+ 3 lowercase Umlaute
+ 3 capital Umlaute
+ 1 lowercase ß (we’ll skip the ugly capital ß…)
= sixty(!) different letters to give a shot if you can’t decipher a single letter, SIXTY bloomin’ options…! If there was just a way to narrow down the choices, eh?

There is a way and it mainly has to do with the so-called ascenders and descenders.

Wikipedia explains that in typography, an ascender is the portion of a lower-case letter in a Latin-type alphabet that extends above the mean line of a font, like the roof ascends over the main house.

A descender is the portion of a letter that extends below the baseline of a font, like a cellar vault descends under the main house level.

Ascenders and descenders increase the recognizability of words.

You can apply the following system to most(!) Sütterlin and Kurrent type scripts, but not to all. In these examples I picked the Sütterlin script and divided all letters into seven different letter-groups:

And here’s the question I ask myself…

… when I can’t decipher a particular letter:

When I’ve answered that question, I pick the particular letter-group and give each of the (now few) letters a try. Usually I find one that makes sense within the word context, tada, problem solved for me. Of course it’s more difficult for you because you don’t know the German words well enough either. But we’ll work on that in other postings.

In general you should be able to narrow your options down from 60 different letters to just 4 if you’re lucky (or 17-20 if you’re out of luck). MUCH better than the bloomin’ SIXTY options we had before, isn’t it?

And if you’d like to give a font generator for old German fonts a try, check out Michael Nülken’s website. He’s a publicly appointed and sworn expert on old German handwriting and blackletter fonts. Enter your text, switch font size by clicking on the up/down arrows, choose a font color, then click on one of the font icons. You’ll see your text in your desired font and can compare it to whatever unreadable chicken scratches a priest or clerk scribbled down a century or two ago.

Below your own text you’ll then see the first sentences of the German fairytale “Rotkäppchen und der Wolf” (“”Little Red Riding Hood and the wolf”) in the same font. Really neat…

A note on the sample sheets

The letter-group sample sheets 1-7 above only work for these particular types of font but you usually can apply this system to many documents.

BUT: if you stumble over a script or letter that doesn’t “stick to the rules” you need to adapt your letter-group sample sheets.

If you have longer documents or numerous pages by the same writer you should probably create your own sample sheets based on that particular writer’s own handwriting style.

I have to admit that this has been a long posting, and the whole caboodle probably isn’t easy for you. But practice makes perfect, and I’m willing to give you a helping hand when you get stuck on a letter, word or phrase. Just give me a holler. 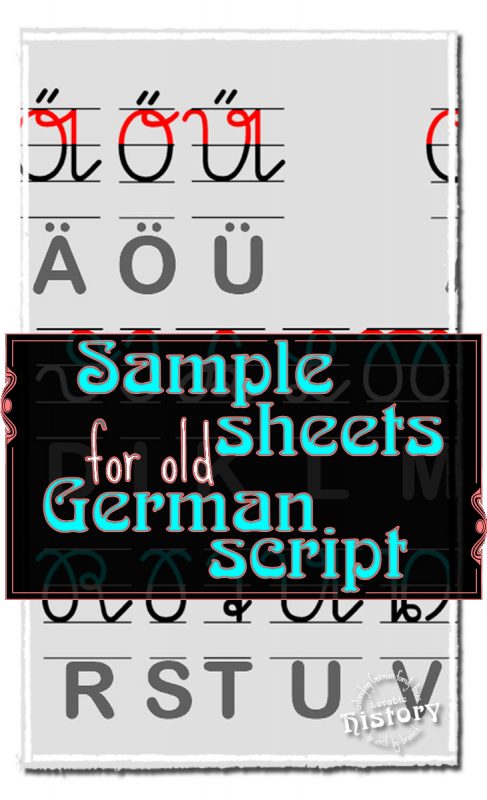