Old documents in Germanic speaking European areas often contain terms and idioms in multiple languages. Clerks and priests not only used the German language for a baptismal or burial entry for example. Very often you’ll find Latin terms, or idioms in a local German dialect. And in certain times and areas you’ll even find other locally used languages like French as well.

Trying to read old documents in an old foreign handwriting and an outdated foreign language can be very.very.very challenging. To be honest, even German genealogists do not only fight with the handwriting but the antiquated language as well!

Most of you (and all of me) like to know more than just day and place of death for example. In this new series I will list German and Latin terms and idioms you’ll find in old German documents. Sooo… let’s roll up our sleeves and get started. Here’s a collection of terms and idioms dealing with pregnancy and birth back in the days.

“Planned parenthood” wasn’t really common back in those days. Therefore pregnancies often “just happened”, whether welcome or not. Prenatal care was mostly unknown. Very often heavily pregnant women literally worked until they went into labour and gave birth. Not to mention malnutrition, quite common but moreso also due to the frequency and spacing of pregnancies. So you can imagine that pregnancies and births didn’t always go well.

Probably it was awkward for the priests and clerks to talk about “female things”. Maybe that’s why they often preferred the Latin expressions over the German ones. I marked the English terms in bold black, German terms in blue and Greek and Latin terms in green.

A short note about Latin words and grammar: The suffix of a lot of Latin adjectives points to a person’s gender. The suffix “-us” is male, the suffix “-a” is female. So… if your text reads “baptizatus” it refers to a boy being baptized. If the text reads “baptizata” it refers to a girl being baptized. To make the explanations less confusing, I mainly used the male version. But the examples also apply to females, you just have to swap the “-us” for an “-a”.

I’m sorry if it sounded as if most children died before, during or right after birth. Of course this isn’t the case. Many children were delivered in time, and mother and child survived pregnancy and birth quite well.

This list of terms and idioms is by no means complete, and I don’t claim that I didn’t make any mistakes and typos. But I hope it will give you a helping hand when you try to decipher church and civil records. Don’t feel shy to ask about terms and idioms you came across and can’t read or understand. I’ll try to help you to find out what that term means. 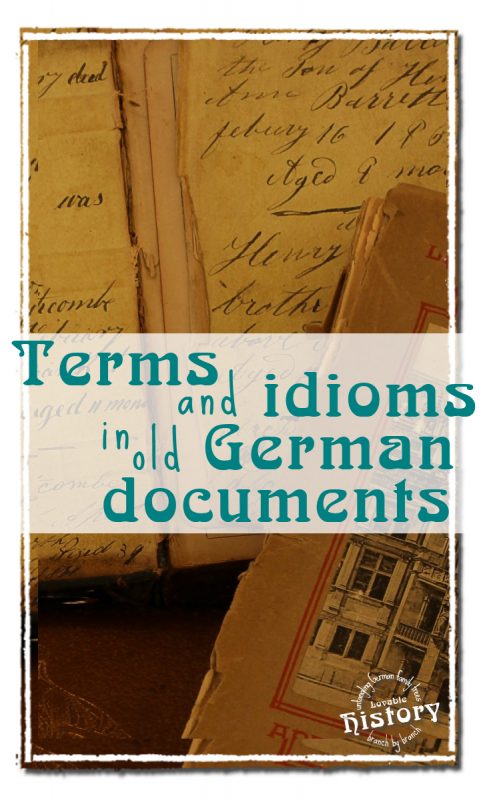