This article is part of the series “Get Familiar With German Given Names In Old German Script” where you will find similar articles about other German names, including name variations and examples out of old documents. In this article we’ll deal with old German script Heinrich resp. Henriette.

Some of the name variations are mainly used in certain German regions so it might well be that you’ll never ever see them in your own research. But according to “better safe than sorry” it’s not one of the worst ideas to list them all, don’t you think? Please have a look at the list below.

For more and international variations of Henrich resp. Henriette please have a look at “Behind the name“, an incredible name website with more than 200k of names all over the world. Please also pay special attention to the very interesting internal links on the right side of their page:

Here and there you’ll notice that I meddled with the snippets. To make it easier for you to spot the single letters I erased all leftovers and cutoffs from other words and letters. 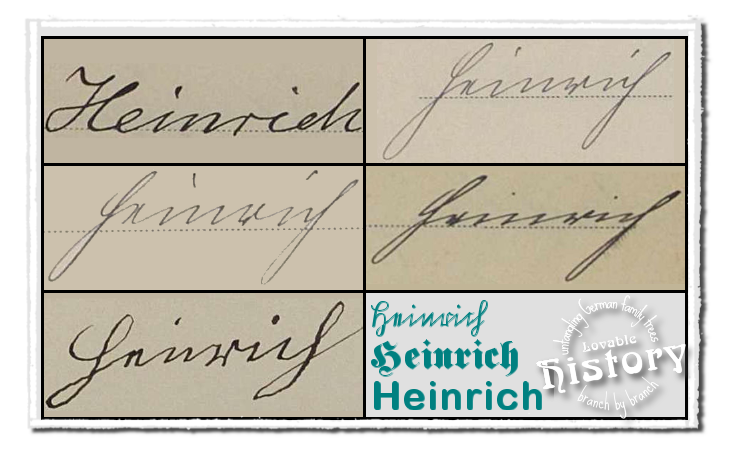 We’ll start easy. These are the first five versions of the name “Heinrich”, all from a municipal death register around 1900.

The first snippet in the upper left corner is from a father who had to report his child’s death. The letters are actually Latin and not Old German. You’ll often find both types of letters mixed in the same document, sometimes even in the same word.

The second snippet in the upper right and both snippets in the middle row were written by the municipal clerk. The name is written in Old German each time and looks quite similar in all three cases, even though there were actually two clerks writing this. Can you spot the two individual handwritings?

The fifth and last snippet in the lower left corner is another father’s signature, this time in Old German letters. But if you look closer you’ll notice that something’s not quite right. You see the “H”, the letter with the two loops, at the beginning. Then the “e” with the two narrow vertical lines. Then – look closely – there are two vertical lines connected by a diagonal line, that’s usually an “n”. But – there’s the dot for the “i” over that as well. So, either he signed with “Henrich” and the dot is just a fly spot – or he skipped the line for the “i” but added the dot on top of the “n”. Just looks a bit weird.

Another thing you might notice is that here the uppercase “H” never resembles the Old German handwriting “H” as depicted in the lower right corner. It always looks like a slightly larger version of the lowercase “h”, doesn’t it?

And what do we learn from that? Don’t take it for granted that people back in time wrote exactly as we think they should’ve done. Some did always, some only sometimes, and a lot of people had a very individual handwriting style. Just like today. 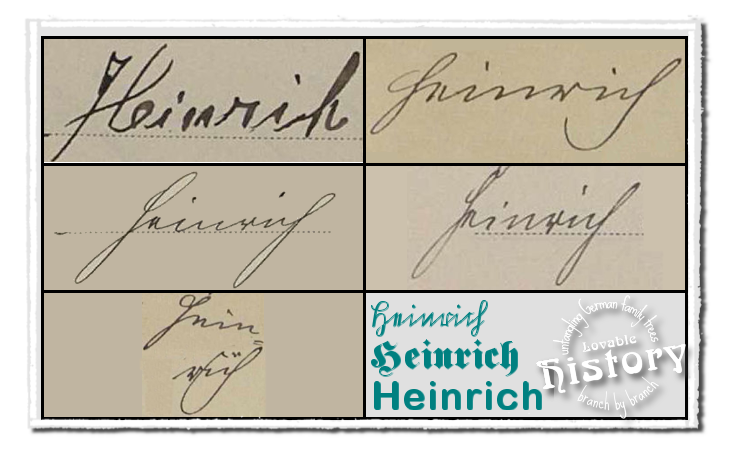 Another batch of snippets, again depicting the name “Heinrich”.

The first one is interesting as the writer mixed both Latin and German letters in his signature. Most letters are Latin and should be fairly easy to read. The “n” and the “r” on the other hand look very much like Old German letters. And the “c” is almost unrecognizable, nothing roundish like we’d write it, more jagged, like an Old German “c”.

The second and the third snippet should be easier to read since they look a lot like those of the first batch above.

The fourth snippet is similar but it’s tempting to read “Hinrich” because the “e” hides quite sneakily in the shadow of the uppercase “H”. Sneaky thing… Of course that word reads “Heinrich” as well.

The last snippet might be confusing. The writer didn’t have enough room left in the row so he simply chopped off the name:
Hein=
rich.
And actually you are lucky he indicated that with a hyphen. Yes, that thing which looks like an equal sign slightly below the “n” is indeed an old-type hyphen. Very often writers even skipped that and just left the first part of the word dangling at the end of the line. Then they continued with the rest of the word on the next line. Yikes, even after so many years I dislike that very much. 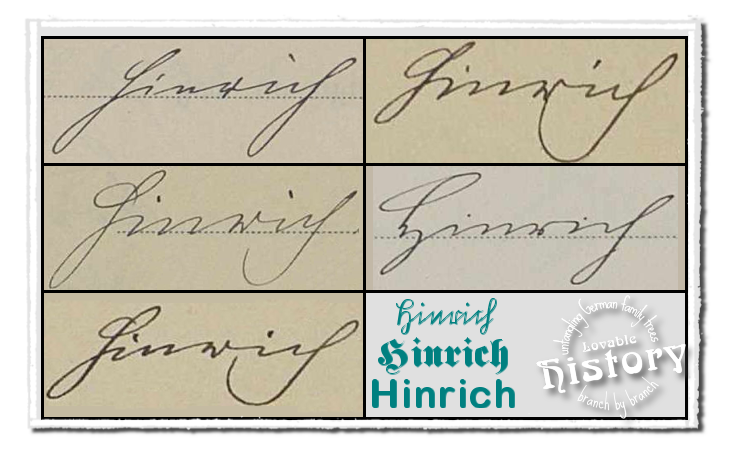 Here’s the name “Hinrich”. All words look quite similar and you should now easily recognize the seven letters.

All but one… The fourth snippet, in the middle row on the right, is one of the few words where the writer really used the proper Old German uppercase “H”. Can you see that? Not as pretty as the official version but that writer tried at least 😉

I already knew a lot of Heinrich variations but I would’ve never thought that there were as many as listed above – honestly! Sooo… which forms of Heinrich did you discover in your family? Anything unusual?