Actually there was no single state or country called Germany for a long time. Whenever someone speaks of research in Germany they’re referring to a huge area that consisted of several hundred sovereign states at some point or another in the past. There were

Just to get an idea of how “Germany” looked like in the past centuries, have a look at two maps. Compare a map of 1789 (left side:”Das Heilige Römische Reich”) with a map of 1815ff (right side: “Der Deutsche Bund”), both from Wikipedia. You’ll notice a multicolored “rag rug” of territories on both maps.

Some territories became significantly larger over time, e.g. Königreich Preußen. Just look at the two blue blobs in the northeast and in the west of the second map. One says “Königreich”, the other one “Preußen”. Same with Königreich Bayern, the two pastel green blobs in the south of the second map (“Kgr. Bayern” resp. “Königreich Bayern”). A lot of smaller territories disappeared after 1789. They were “united” with other territories mostly by the means of marriage, heritage, contracts or simply by being occupied.

Each of those territories had their own frontiers, own laws and own taxes. Travelling from Preußen to adjacent Sachsen to the south required a passport to leave your homeland and travel “abroad”.

Nothing was chiselled in stone

The territories’ names, their religious affiliation, their ruling dynasties, their frontiers, their allies… all this changed and shifted several times over the centuries. Some of the territories don’t even belong to modern Germany any longer while others belonged to other European states, at least for a while. Most of the German territories had the German language in common at least, even though their dialects differed enormously as well. Other German territories had a different native language. Germany as we know it now is a relatively young construction.

Don’t expect the political territories to be always identical to the ecclesiastical territories either – even though some sovereigns were clerics. So you don’t only need good political maps of times gone by but also reference books of villages and towns and their corresponding parishes. Just like the political affiliations the ecclesiastical affiliations might have changed over the centuries, too.

Complicated? Yes… just a few minutes ago I discussed “one country called Germany” with my 18 year old son and he agreed. So don’t feel bad if you’re stuck, you’re in good (German) company 😉

What does that mean for your research?

Each state had its own rules of what and how events were recorded and where the records were kept. Therefore you will have to consult different archives to find what you’re looking for. There is no central German archive for all the records! The closest thing that resembles a teeny-tiny central archive nowadays is the Internet, go figure!

Most records were kept in the city hall resp. in the parish that was in charge of your ancestors’ town. To find out which parishes and townships were responsible for your ancestors’ places of residence you should have a look at “Meyers Orts- und Verkehrslexikon des Deutschen Reiches”, published in 1912/13.

Praise be to the modern times and their international spiderweb as they provide a wonderful online searchable version of “Meyers Gazetteer“. Enter your ancestors’ place of residence (even if you only know a part of its name…) and it’ll show you a bunch of information which will point you into the right direction. You’ll learn where to find the church registers or civil registers for your ancestors’ place of residence or which court was responsible for that place. The gazetteer covers the German Empire 1871-1918 but in many cases tends to be useful even for times before that.

And don’t worry about the old German Fraktur script the gazetteer uses. On the website you’ll be able to see the entries as they appear in the gazetteer, the text extraction in a modern font, explanations and a map. Just luvverly !

On top of that a good general map collection and a short yet detailled history of your ancestors’ home country/area won’t hurt either. Both the maps and the histories should cover political and ecclesiastical events which will make your research much easier.

Do you already have any maps or historical works about your ancestors’ German hometown? I’d love to hear about your experience with German maps, local history and reference books. 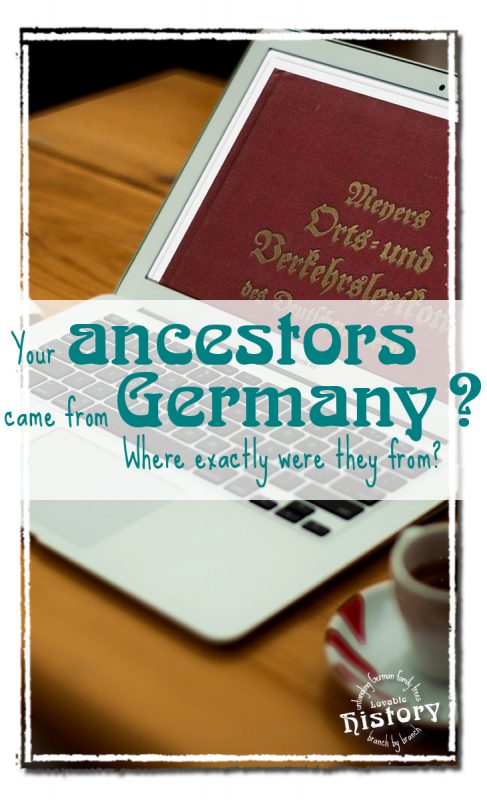