Girdle books were in vogue about 400-600 years ago and still are unique and beautiful accessories to contemporary LARP or historical re-enactment events. In this posting I’ll show you how to make authentic thorn crust ink for projects like a girdle book.

The recipe and its author

The Benedictine monk Theophilus Presbyter (possibly identical to Theophilus Monachus and Rogerus von Helmarshausen) was a 12th-century author of a Latin collection of recipes and instructions about various medieval techniques of art.

He was probably born around 1070 in the diocese of Liège. He first worked in the Stavelot monastery, between 1100 and 1107 in St. Pantaleon in Cologne, and finally in the monastery of Helmarshausen. He died probably after 1125 in Helmarshausen.

Rogerus probably created two portable altars which are on exhibition in the cathedral treasury in Paderborn. Rogerus founded an atelier in the monastery of Helmarshausen in which significant works of Romanic art emerged in the 12th century, like several codices, including the Gospel of Henry the Lion, as well as other goldwork and possibly the famous Minden Cross.

The collection of manuscripts he composed is called “Schedula diversarum artium” (also “De diversis artibus“) and was probably created around 1100/1120. The oldest preserved manuscripts are in the Austrian National Library in Vienna and in the Herzog August Bibliothek in Wolfenbüttel. Ephraim Lessing discovered the manuscripts as a librarian in Wolfenbüttel. A first German edition of parts of the work appeared in 1874.

The “Schedula” is by no means a complete work, quite the contrary. The results of a systematic recording of all “Schedula” manuscripts is online as digital database presentation, linked with facsimile and descriptions of the manuscripts.

How to get started with Dornentinte aka Thorn Crust Ink

Dornentinte is made from the bark of blackthorn branches. It combines the light resistance and durability of the carbon black ink with the water resistance of the iron gall ink without possessing their disadvantages. The end product is a coarse to fine-grained concentrated powder and almost indefinitely durable. For writing the powder is dissolved in warm wine. The Dornentinte has a red-brown, translucent colour.

In order to make the ink darker and more opaque, Copper or green vitriol (iron-II-sulphate) was added which then combined with the bark’s tannic acid to form a black compound. Because that also is the cause of ink corrosion which mostly affects valuable manuscripts and “eats away” the paper, you better skip that step and be happy with the brown translucent colour which definitely adds zest to your handwriting.

Just a short note about the pictures: When I took them it was more for me to remember how I made the ink than for anyone else to see it, let alone as high quality pictures for a blog. So I beg your pardon if some of the pictures look grainy and ugly.

In the spring – after the winter rest but before the shoots of blossoms and leaves appear – the branches are cut and dried for some time. Then the bark is tapped with a hammer to lift it from the lighter inner wood of the branches. The gray-green bark can be peeled off in elongated, fibrous pieces.

Get out your cooking pot

The peeled bark is put into an old cooking pot with boiling water, covered with a lid and left brewing, very much like tea. This herbal infusion then slowly turns red-brown, as you can see in the picture above. This extract is filtered, brought to a boil and poured over the same pieces of bark again. Repeat this every two or three days for several weeks. The smell needs getting used to but the extract doesn’t smell worse than most medicinal herbal infusions I know – although the latter probably taste better than the Dornrindentinte which is extremely bitter (and yes, I did taste a droplet, I’m curious. Been there, done that, never again…).

After a few weeks (when you notice that the pieces of bark don’t give off more colour) boil the extract until the mass begins to become slimy like watery gelatine. Then add 1 part of wine to 3 parts of the extract and continue to boil the mixture until a light skin forms on the surface. Without the lid the smell of the extract and the wine is more intense – my children muttered, “Mama, your ink stinks.” After that step you can filter out as much sediment as possible.

In medieval times the extract was poured into animal bladders and parchment bags and then dried in the sun. This of course took several weeks, depending on the summer temperatures. I preferred to use modern technology (i.e. artificial heat). Firstly we didn’t have a “super summer” in that year, and secondly I did’t want to offer my two tomcats a “kill” in form of swinging parchment bags. As you can imagine, my family wasn’t too happy about the smell. But they still are alive and kickin’, the smell didn’t kill them.

The end result can vary from “ink nuggets” to fine powder, depending on whether you use mortar and pestle or not.

Store the nuggets or powder in a dry and airtight containe. Dissolve only as much powder in warm wine as you’ll need. Let any leftovers dry out, dissolve in warm wine again when needed. If the container isn’t really airtight, the humidity will clump the powder or nuggets – difficult to take out and difficult to dissolve properly.  This ink is brown and darkens with time.

Just a warning though:

DO NOT use this ink in a modern fountain pen because it’ll clog it!
Even if you filter out the sediments there will still be enough to RUIN YOUR PEN!
Thorn crust ink is an ink for goose quills or metal nib pens!
(Metal nip pens often are made of iron: possible risk of ink corrosion over time)

Dornentinte is supposed to be waterproof and light resistant. We’ll see…

For this purpose I put samples on a southern window and scanned at intervals of two to three weeks. The summer of 2008 was not quite as warm and bright as we hoped for. Nevertheless the test showed interesting results, especially in comparison with other inks. For the light resistance I tested the following (from top to bottom):

The results are self-explaining I think. Just compare the first with the last column. Notice how the thorn crust ink darkens(!) at first, amazing, isn’t it?.

30 seconds under running cold water was not a good idea for all of the inks. Please compare the samples before (“vorher”) and after (“nachher”). Embarrassing for some of the “candidates”, isn’t it? Needless to say that I stopped buying one of the blue inks for my school children after I saw the results for light resistance. I didn’t have to wait for the water resistance results to make up my mind on that…

And what did I learn from all that?

After I made the Dornentinte and used it for some of my projects, I can now understand some of the problems the priests and clerks faced back in those days. Sometimes their problems drive us genealogists mad or at least insane.

Annoying ink smears or drops did happen more often than I had hoped for when I used the ink, no matter how much I tried to avoid them.

If I used too much wine or if the paper wasn’t properly saturated with bone glue this would happen to me as well.

I now know how much time and patience (and enduring the smell) it takes to make this ink. This made it either too time-consuming or too costly to waste it. So the priests and clerks tried to stretch every ink drop with wine, and more wine, and even more wine (which isn’t as light resistant as the ink itself).

Have you ever gotten more insight and understanding and appreciation of something after you DIYed it instead of simply buying it? What are your thoughts on that?

This article is part of the series “How to make a medieval girdle book“. 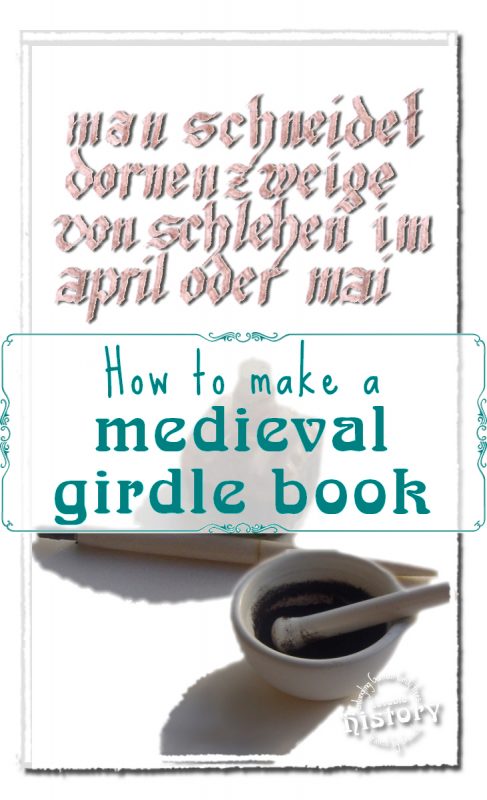