This article is part of the series “Get Familiar With German Given Names In Old German Script” where you will find similar articles about other German names, including name variations and examples out of old documents. In this article we’ll deal with old German script Katharina or Catharina. Apparently there is a male version “Catharinus” as well but it’s only allowed in combination with another distictively male given name.

Some of the name variations are mainly used in certain German regions so it might well be that you’ll never ever see them in your own research. But according to the “better safe than sorry” it’s not one of the worst ideas to list them all, don’t you think? Please have a look at the incomplete list below.

For more and international variations of Katharina please have a look at “Behind the name“, an incredible name website with more than 200k of names all over the world. Please also pay special attention to the very interesting internal links on the right side of their page: 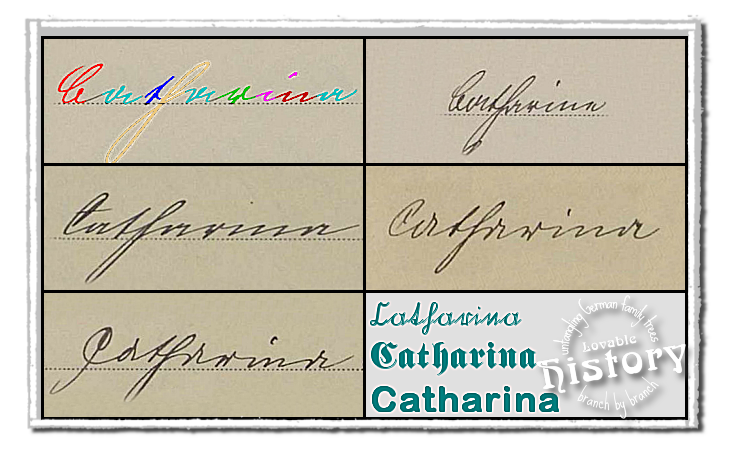 We’ll start easy. These are the first five versions of the name “Catharina”, all from a civil register around 1900. These five snippets show two variations: “Catharina” and “Catharine”

Can you spot which one the five snippets says “Catharine”? Compare the last letters! A Kurrent “e” very much looks like an “n” but the vertical strokes are much closer together and connected at the top with a tiny horizontal (or slightly diagonal) bar.

Sometimes the vertical strokes are so close together that you can’t even see that they are connected. (example e) Sometimes the connection isn’t there at all! Compare the letters “a” and “e”. In some handwritten documents you won’t even be able to decide whether the last letter is an “a” or an “e”… However, that depends on the writer, really, don’t feel bad about that. Just work as accurately as you are able to. 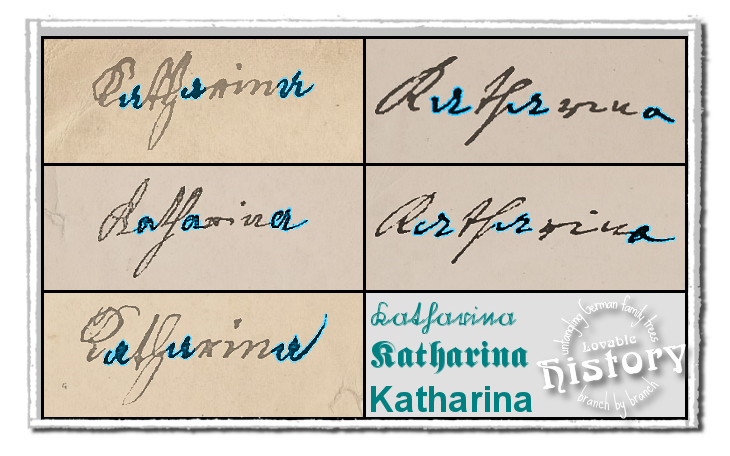 Here you see five variations of the name “Katharina”, copied from church registers around 1800. Even though it doesn’t matter for the pronounciation in German, please don’t transcribe this variation with “Catharina” or “Catherine”. Always use the original spelling in the source!

Katharina, Catherine and its variations have been quite common in Germany and still are. I just counted how many of my female relatives carry one of the name variations (ok, ok, I just had my software do that…). It turns out that about 7 % of the women had or have that name, either as only given name or in combination with other given names. Pretty interesting number for me. What about your family and relatives and ancestors?