This article is part of the series “Get Familiar With German Given Names In Old German Script” where you will find similar articles about other German names, including name variations and examples out of old documents. In this article we’ll deal with old German script “Christian”.

Some of the name variations are mainly used in certain German regions so it might well be that you’ll never ever see them in your own research. But according to the “better safe than sorry” it’s not one of the worst ideas to list them all, don’t you think? Please have a look at the (incomplete) list below.

For more and international variations of Christian resp. Christine please have a look at “Behind the name“, an incredible name website with more than 200k of names all over the world. Please also pay special attention to the very interesting internal links on the right side of their page: 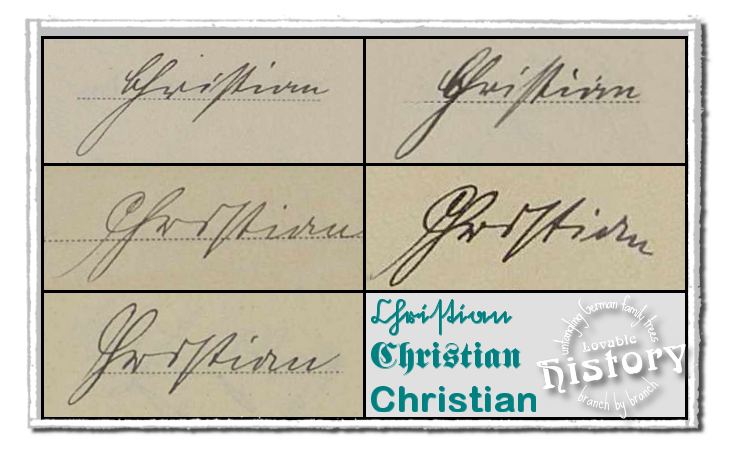 Above are the first five versions of the name “Christian”,

all from a civil register. I’ll show you step by step how to tackle down one letter after another.

We’ll concentrate on the first two snippets and their easier letters first, step by step. Grab pen and paper and start with an underscore for the capital letter which we’ll be skipping for now because it’s a mean one…

More than halfway done… Grab yourself a tea and relax

Heading down the home stretch…

Now have a look at snippets three, four and five and apply the above method to those scribbles as well. See how the scribe gets lazy and simply connects the dot on the first “i” with the next letter so we can’t see an actual dot? Mean, eh?

Let’s have a look at “Christine” and “Christina” 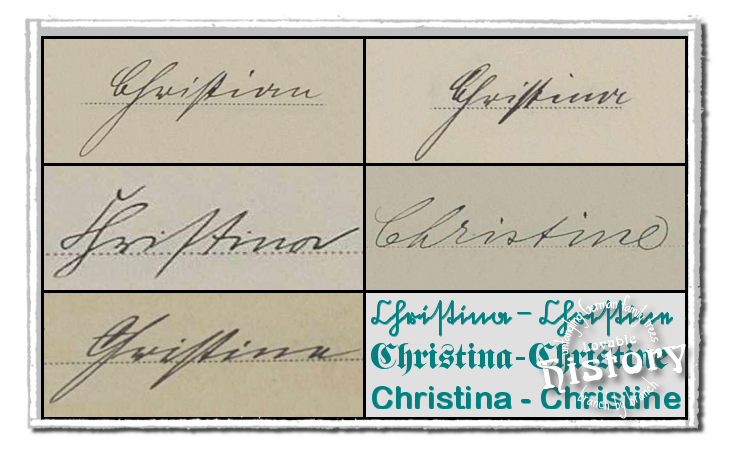 Try to use the above mentioned method to identify each of the letters.  Don’t worry if you’re uncertain because it will get easier with time. And you have the advantage of actually knowing in advance what it is supposed to be.

Some of the letters are fairly easy to recognize if you’ve seen them often enough, aren’t they? Alas, some writers didn’t stick to the rules so to say, even though there actually weren’t really official, fixed rules back then. Even today, some people create their own versions of letters, don’t they? But be honest, do all of your own letters always look the same?