I’m a sucker for pretty quaint chairs, much to my family’s regret. Looking around, I can see a dozen chairs right now, with only half of them being in daily use. The others are in different stages of repair and/or in need of painting and/or upholstering. Using chalk paint and wax on them is a wonderful way to bring them back to beauty.

“If it’s the right chair, it doesn’t take too long to get comfortable in it” (Robert deNiro)

I have a lot of “right chairs” around me. I’m not mentioning my other mismatching chairs in the basement… or the attic… or the patio… oh look, another chair! Some of those chairs seem to be in a bad condition, I admit that. But I always try to picture them as the beauties they will be when I have fixed them.

One of those drab-to-fab projects in the past years was fixing two chair siblings. At that time I didn’t even think of blogging someday so unfortunately I didn’t take step-by-step pictures.

But my father who always supported me with this kind of projects fell quite ill. He wasn’t able to visit as often as he used to. To keep him updated nevertheless I took before-and-after pictures especially for him. So forgive me if several pictures are blurry or grainy.

Back then I was lucky to score two chairs from Ebay for small money. It didn’t hurt that the owners didn’t want to bother with packing and shipping. A lot of people can’t be bothered to bid for an item on Ebay if they have to pick it up at someone else’s house instead of getting it delivered to their own doorstep. So that pushed down the price for the two beauties which I picked up at their owners’ home.

Lovely house, lovely people, lovely furniture, at least for my liking. The owners just didn’t want to spend more money on fixing those chairs than for buying “new” old chairs. Lucky me…

Those chairs were an almost identical pair, more than 100 years old, with typical signs of wear. The differences between them mainly came from them being made by hand and not by an automated process.

As you can see on the picture below, the carved leaves on top of the backrest were bolder on one chair and finer on the other. One backrest was a tad higher than the second. The different elements of both backrests also differed slightly in height and width. Both seats had a different sort of rattan weaving.

Luckily neither chair had missing parts or deep scratches and both were still sturdy, so they didn’t need any serious structural mending, except for the seats.

Though it doesn’t show on the picture below, both rattan seats were beyond remedy. The material was very brittle and unfortunately broken at the edges of the seat. Sitting on them probably would have put your buttocks at risk of breaking through and getting stuck in the seat, the broken strands of rattan poking most delicate places of your rear, not a nice thought.

I kept the good parts of the rattan weavings for another time and project, and decided to touch up the chairs by using chalk paint and/or wax on them.

The icky and dirty tasks first

As much as it hurt me I had to cut off the rattan and remove all remnants and debris. Did you ever have a good look at such a seat? Then you might know how many holes are needed to hold even more strands of rattan.

And here’s serious advice from me: if you ever have to remove broken pieces of rattan, get yourself some good sturdy rubber gloves and a dust mask! No matter how clean the chair itself may be, there’s what seems to be tons of fine dust, dirt and other unidentifiable ingredients hiding in those holes, probably some of it for a long long time… an unsavoury and smelly affair, I assure you. And nothing to let into your nose and lungs…

Also make sure you have needle-nose pliers ready to hand. You’ll need them to pull out the tiny bits and pieces of rattan strands and what else hides in those holes. Subsequent thorough vacuuming is a must!

After that icky task there was a dirty task waiting for me. I cleaned the wood with mild soap water which usually turns into a brown-greyish muddy brew. In my case it seemed less like real dirt but more like a mixture of brittle shellac and wood stain. Soap water usually does the work, no real need to use more aggressive detergents.

You should quickly and thoroughly dry the wood so it doesn’t swell up, especially the joints so they don’t come apart. Bone glue is not moisture proof – and soggy old bone glue has a very unpleasant smell to say the  least…

And now the fun part for me:
… using chalk paint and wax on the chair frames.

My mom eyed one of the chairs and hinted at her upcoming birthday. I heard ya, mom!

For my mom’s chair I used an eye-pleasing brown wood stain to renew the shade of colour and let it dry. Then I coated the chair with two very thin layers of Annie Sloan clear wax, immediately wiping off excess wax. After two days when the wax wasn’t sticky any more it was time to polish the chair with a stiff brush to add a silky sheen. Tada!

The second chair was mine, hah! I applied two coatings of Annie Sloan Chalk Paint in Old White. When the paint was dry I used some very fine steel wool to remove any bumps and streaks and leave the paint as smooth as a baby’s bottom.

I like old furniture that shows some signs of wear but it shouldn’t look as if a polar bear has been swinging heavy rusty chains at my little furniture baby… so in general I’m using steel wool very gently.

To add some signs of wear though I like to use a slightly damp sponge to moisten the chalk paint in those places that usually get touched a lot.

If you sit on a chair and pay attention to where your back, buttocks, legs and feet inevitably touch the wood you’ll know where to apply the damp sponge and wipe off some paint. This way you don’t damage the wood underneath, sand off the wood stain or even ruin delicate carvings or applications. Also use the sponge on the corners where a chair would bump against the wall or a table.

Once I was satisfied with the signs of wear it was time to apply wax on chalk paint. I waited until the paint was completely dry again before I applied two thin layers of ASCP clear wax. Same procedure as with the first chair: wax, wipe, wait and  polish… Tadadaa!

Two chairs – and nowhere to sit

Now there was the problem of missing seats left to solve. My mom wanted a comfortable yet not too squashy seat.

I put the seat on top of the yawning hole and used four small brackets and fitting screws to attach it from the bottom side of the chair frame. Tadadadaa!

My mom loved her birthday present and complemented it with an equally coloured low six-sided cabinet in place of a table, along with an old table lamp, a huge green fern and framed flower paintings hanging above. She likes to show off this ensemble when she has guests.

Last step yet to go…

Only one step left now: to find a replacement for the broken rattan seat on my own chair. I’d love rattan weaving again. But there aren’t many people left who were taught by a master of this old craft. And having one of those few people fix my lil’ chair will be quite costly, that’s why the chair’s former owners sold the chairs for cheap.

I’m not saying that kind of work is expensive or even too pricey though. It will take several hours to push and pull a three-digit number of stiff rattan strands through more than one hundred holes in the wooden frame, pull them tight and secure them one by one with a tiny fiddly wooden peg each. If skilled people make a living from this kind of work they should be paid accordingly, hence it’ll be costly, and rightly so.

But I don’t dare to try my hands on rattan weaving on my own – not yet at least. Now and then someone in our local area offers courses in this old craft. Maybe I should try to snatch a spot in one of these.

Long story cut short: I beautified my own luvverly chair by using chalk paint and wax (ASCP Old White and clear wax). But it still has that big hideous hole where a seat should be, covered up by a piece of unsightly raw plywood loosely attached to the frame as a workaround hidden under a creamy seat pad (which apparently my two tomcats love to use, the Ikea Elsebet seat pad doesn’t really come assembled with lots of red cat hair…).

What would you suggest how to finish my chair? 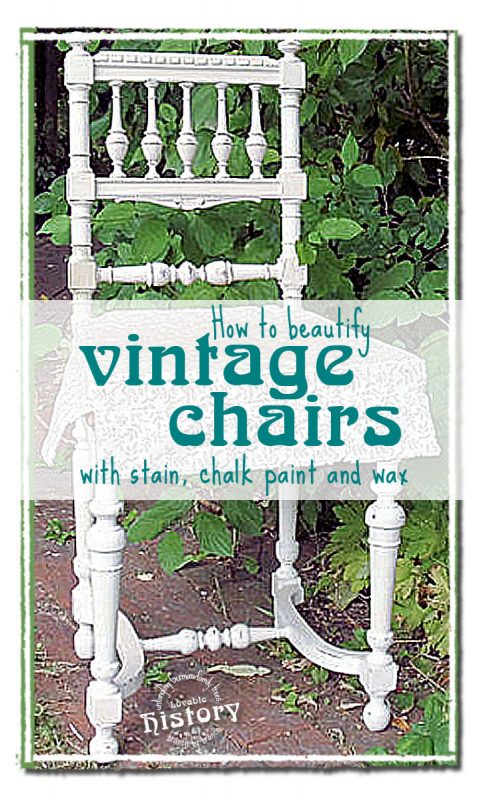